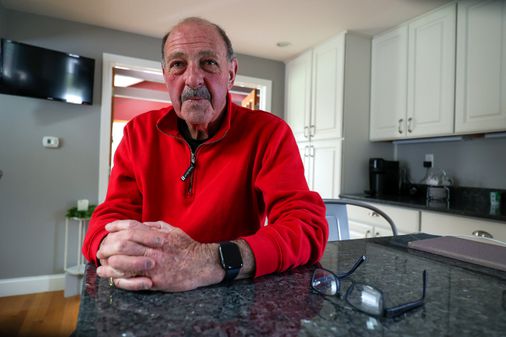 Following Apple’s instructions, Son placed the old watch in the box the new one arrived in, sealed it, and affixed the Apple-supplied FedEx label. He promptly dropped it off at the FedEx facility in Dedham.

Boston Globe technical reporters tell the story of the region’s technology and innovation industry, highlighting key players, trends, and why they matter.

But when his credit card statement came in last month, he saw a $328 charge from Apple, apparently the cost of his new watch.

On his first call to Apple, Son reached a customer service representative named Jeremy, but only after his call was forwarded four times, over a period of more than two hours.

After a few minutes on the phone with Son, Jeremy said that Apple charged him for the new watch because it never received the old one, Son said.

Son offered Jeremy the FedEx tracking number. Could Apple not work with FedEx to track down the watch? After all, it was Apple that made all the shipping arrangements with FedEx and paid the fees, Son said.

No, said Jeremy. Son had to call FedEx himself.

Son did as he was told and spent 90 minutes on the phone with FedEx, mostly on hold. Couldn’t FedEx determine the watch’s whereabouts with a few keystrokes on its computers? And couldn’t it deal with Apple?

FedEx was not interested in the tracking number Son offered. The only way for FedEx to investigate was for Son to file a claim, FedEx customer service said.

Son did as he was told. He has filed his claim. But a few days later, FedEx emailed him that “on the completion of our investigation, we should respectfully reject your claim.”

Why? FedEx gave this inscrutable explanation: “Our records indicate that an addendum has been added to your contract stating that you agree not to make any claims arising out of transportation services provided by FedEx.”

That was it – no further explanation in the denial letter.

“What kind of addition?” I never agreed to an addendum,” Son said. “I don’t know about an addendum. This is crazy.”

Son immediately called FedEx for an explanation. A customer service representative promised to call back. But no call came.

Son also called Apple and eventually reached Jeremy, who for the second time told Son to fix the issue with FedEx.

“Basically, he said I was dealing with FedEx,” recalls Son.

Son called FedEx for the third time. “I don’t understand this addendum,” he told FedEx. “Why is it blocking my claim?”

The FedEx customer service representative told Son that he was dealing with Apple, as Apple apparently had an agreement to disarm FedEx in the event of lost packages addressed to Apple.

Son called Apple for the third time, but a promised callback never came. He went back and forth.

“Apple and FedEx kept pointing at each other,” Son said. “And I was in the middle of it. I felt like the ball was in a ping pong match.”

Frustrated, Son asked me to help. After reviewing the documentation, I pointed out to FedEx in an email that Son had not agreed to an “addendum” and had no idea why his claim was denied.

“FedEx seems to be treating him unfairly,” I wrote. “Contact me.”

Within 24 hours FedEx did not reply to me, but directly to Son. This time, FedEx’s explanation was understandable: “Due to a contract agreement FedEx has with Apple, and because Apple’s account was used to ship this package, Apple must file this claim on your behalf. Please contact Apple to make this claim.”

Why didn’t FedEx say that in its denial letter in the first place? How many FedEx consumers in a similar position to Son give up before being given an understandable explanation?

A similar scenario played out with Apple. The day after I emailed Apple, Son received a call from a manager from Apple’s Corporate Executive Relations team.

The Apple executive told Son that Jeremy had made a mistake when he referred Son to FedEx – twice. “He said I should never have been referred to FedEx,” Son recalls.

Apple promptly credited Son for the amount of $328 on his credit card.

At this point, Son turned the tables at Apple.

The Apple executive had apologized profusely, but Son wanted more than words. When he was a salesperson and something seriously messed up, Son tried to make amends with his customers. And so he told the manager that Apple owed him something.

“What do you want?” the director asked.

They opted for a pair of Apple AirPods, which retail for about $175 and arrived at Son’s home last week.

I’m glad Son got something for all his annoyance. But what really worries me is the likelihood that the vast majority of consumers who move between large companies will give up and end up losing money, let alone being compensated with a “gift” for their lost time.