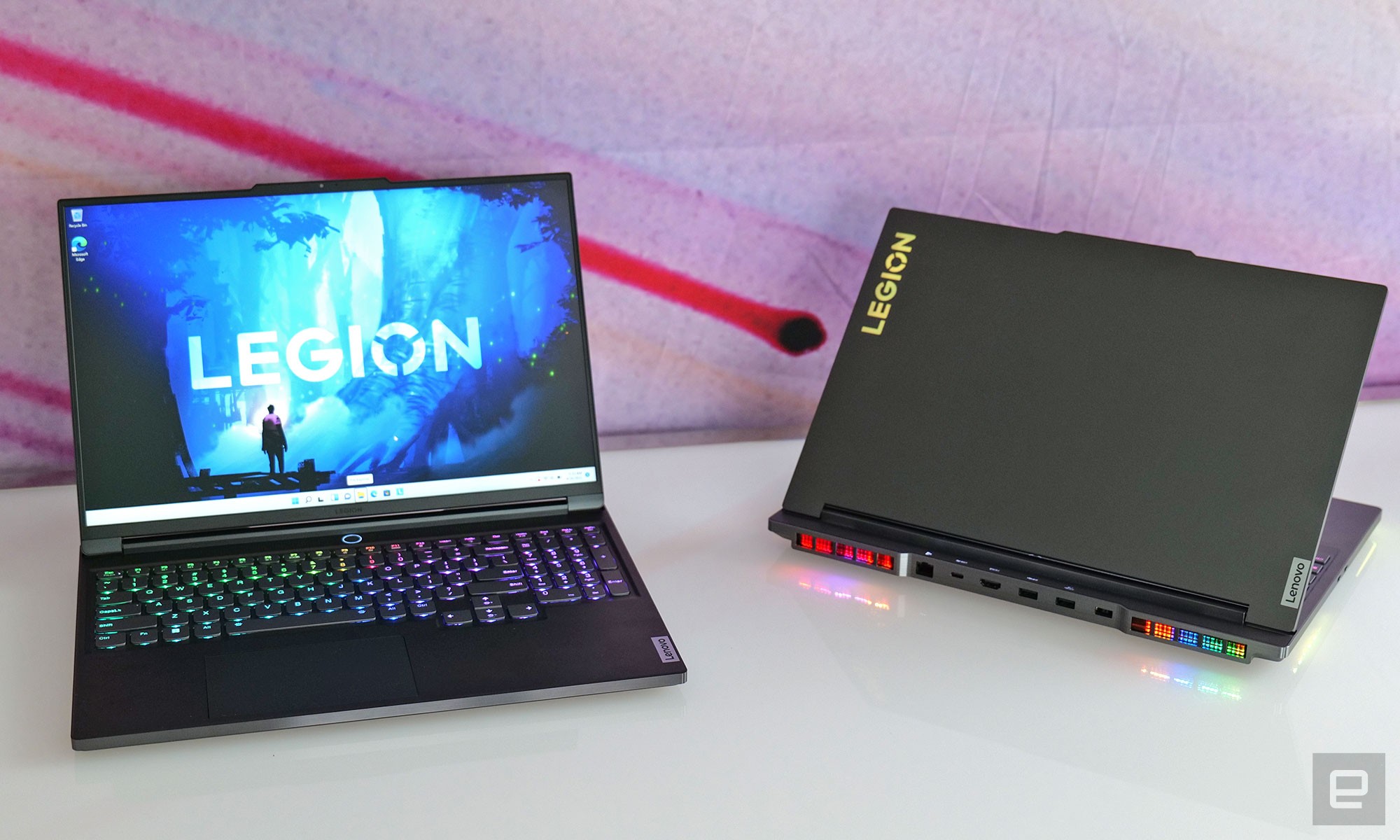 Now the latest components from AMD† Intel and Nvidia available, Lenovo updates its 16-inch flagship gaming laptop with more lights, better performance, and bigger batteries. And after having the chance to get started with the new Legion 7, I really appreciate that Lenovo created two slightly different versions to meet people’s needs.

First up is the standard Legion 7, which is more of a desktop replacement gaming notebook designed to house the most powerful CPUs and GPUs you can fit in a laptop right now. It’s available in Intel/NVIDIA (starting at $2,449) or full AMD configurations (starting at $2,059), with Lenovo supporting up to a 12th-generation Intel i9 chip and RTX 3080 Ti or Ryzen 9 6900HX and Radeon RX 6850M XT.

Those are some solid specs, but arguably the most important upgrade is the addition of a new 99.9 Wh battery. That’s the biggest powerhouse you can put in a laptop while you can still wear it on a plane† Additionally, while Lenovo’s included power adapter is a sizable 300-watt affair, the Legion 7 also supports USB-C power delivery. That means if you want to travel light, you can take a smaller USB-PD adapter (up to 135 watts) with you. However, it’s important to remember that doing this will prevent the laptop from charging as fast or at full performance when plugged in.

That said, the most eye-catching part of the system is without a doubt all the RGB lighting scattered throughout the chassis. You get a glowing logo on the lid, a backlit keyboard with optional per-key customization, a large light bar on the front and a bunch of LEDs in the vents. Now I don’t know if anyone is tracking these kinds of stats, but the Legion 7 has arguably the most RGB lighting of any gaming notebook.

While it wasn’t ready in time for my practice session, Lenovo says it’s also planning to release its new Spectrum app designed to give users more control over lighting effects, including the ability to sync things to what music. or video for that matter. playing.

I’m not sure I like the brushed metal edges of the system, but I have to give Lenovo some props for including three USB-C ports on the left and right sides of the laptop. This makes it easy to plug in things like USB sticks, while there’s extra connectivity in the back for things you don’t have to fiddle with as often, like power, Ethernet, HDMI and more. And in addition to a new 1080p webcam (from 720p), you also get a dedicated electronic shutter slider on the right side for more privacy.

Overall, the Legion 7’s build quality also felt good. There wasn’t very little flex on the lid or deck, and while touchpads are often an afterthought on gaming laptops, this one is both large and responsive. Unfortunately there were no games installed so I couldn’t get a sense of the thermals or the fan noise. But I do like the laptop’s updated power button, which now has a built-in fingerprint reader.

That said, while I respect a large, high-spec gaming laptop (and anyone willing to carry one), weighing in at 5.5 pounds, the Legion 7 isn’t a good choice for frequent travelers. But that’s where the Legion 7 Slim comes in. That’s because, while you still get a 16-inch screen, support for a 99.9 Whr battery, and a very similar design, Lenovo has increased the Slim’s portability by reducing the maximum specs with a touch, allowing many getting rid of RGB lighting and shrinking the case. The result is a thinner and lighter 4.5-pound laptop with a smaller hinge that’s easier to toss in a bag.

Apart from its size, the biggest difference between the standard Legion 7 and the Legion 7 Slim is that the latter has an NVIDIA RTX 3070 or an AMD RX 6800S GPU. And unlike its bigger brother, the Slim’s refresh rate peaks at 165 Hz instead of 240 Hz. The upside is that with the Intel/NVIDIA version of the Slim starting at $1,589 for a Core i5 chip with an RTX 3050 Ti or just $1,519 for the AMD Advantage model with a Ryzen 5 6600H and RX6600S GPU, the slightly smaller system from Lenovo much more affordable.

So whatever type of gamer you are, Lenovo wants to give you some more choices between 16-inch gaming notebooks. And while I’m curious to see how those huge batteries fare in real life (especially when paired with a power-hungry 12th Gen Intel CPU), I really like what I’ve seen so far.

The Intel/NVIDIA versions of the Legion 7 and Legion 7 Slim will go on sale sometime later this month, and the AMD Advantage models will arrive a little later in June.