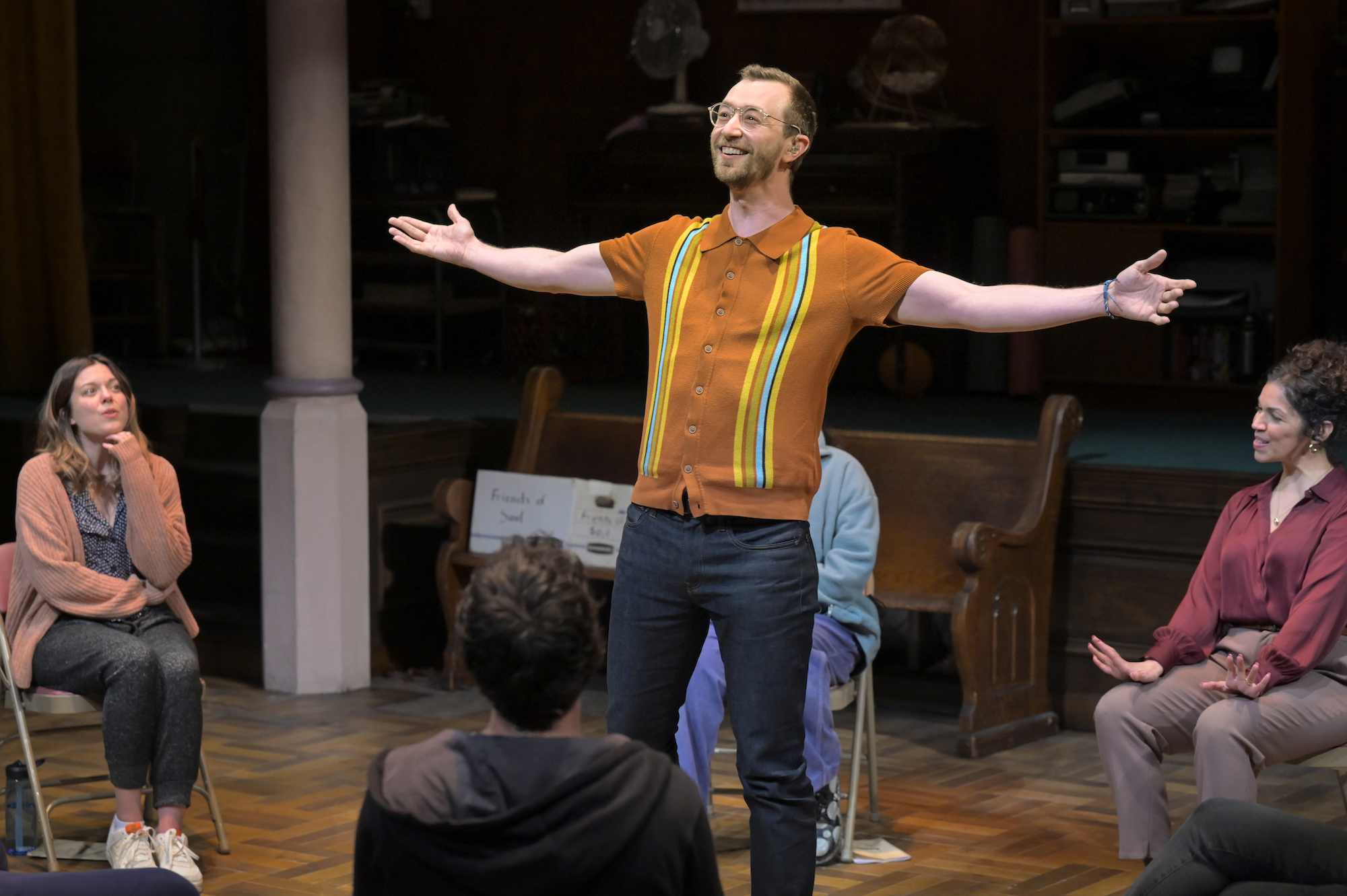 Since my trips to and from the Berkeley Rep have been with maskless BART riders (the company has yet to reinstate their mask mandate), it was at least a relief to finally see the Rep himself checking for boosters at the door. While the show itself would prove to be an ordeal in its own right, I found it comforting to know that – as in the Aurora next door for The incrementalist—In the theater I was a little less likely to get infected.

This theater allows spectators to walk through Amy Rubin and Brittany Vasta’s messy set before the show. In fact, those who entered through Door 1 had to. After passing through the lobby decorated with cork notice boards and numerous neon flyers, we find ourselves in the wood-panelled multi-purpose room of a community building (possibly of a church), post-bingo game. Eventually, the tables and game cards are removed by nondescript cast members. The lights dim, the seven actors (with an eighth on the way) take off their masks and their support group gathers as we spectators pick up the folded church routes in all our seats.

This is how Dave Malloy’s begins Octet, which will have its West Coast premiere at the Rep (through May 29). It’s a largely a cappella musical about how the internet sucks.

No really. Each of the members of the group, led by the khaki sporty Paula (Isabel Santiago), is on hand to share how well they are coping with their addiction to their proverbial ‘monster’. All monsters are digital: Jessica (Margo Seibert) has intense FOMO on social media; Henry (Alex Gibson) has a taste for “all games” [that have] candy in it”; and even Paula admits to seeing the glow of blue light at night. And so forth.

These are all revealed as part of each addict’s share, which takes the meta form of a song with no music other than percussion and added vocals by whoever is on stage. Choreography (for which no one is credited) ranges from solitary to cooperative to militaristic. Christopher Bowser’s lamps almost steal the show in their combined subtlety and accentuation, including direct spots, modest dipped beams and near-disco flashes.

To Malloy’s credit, his lyrics are often entertaining, if not transformative. The characters never make the journey from Sondheim to be changed towards the end, but we get an insight into each of their ghosts. When Paula sings about she and her husband’s shared addiction (“It would be nice if we were kids with flashlights/ Telling each other stories in our linen cave”), it both shows a direct line from one habit to another, revealing a level of immaturity that infects the 24/7 digital world. When she and the group begin their “Fugue State” chant — their support group has the religious tinge of AA with New Age execution — the “I’m obsessed with my monster / I’m obsessed with myself” sounds more true than anyone want to admit with a smartphone.

The problems start when the game moves into the second half without interruption, when characters remember the dark parts of the web (though not necessarily the dark web). It starts with Karly (Kim Blanck) and Ed (Adam Bashian) bartering about being on opposite sides of the dating app dichotomy: she’s the recipient of countless dick pix and Nice Guy™ threats; he’s so insecure that he can join the incels attacking Karly (it’s not clear if Ed’s part is being spoken or just in his head). We then meet the usual contrarian Toby (Justin Gregory Lopez) and scientist Marvin (JD Mollison), an otherwise logical man who thinks his job is to take down conspiracy theorists.

These segments are just as revealing as their predecessors, but they’re way too long, each averaging ten minutes where the first half’s were three-on-five. Malloy’s commentary ranges from perceptive to Aaron Sorkin-esque digital demonization to outright wallowing. It’s no wonder his characters call their addictions “monsters,” as the script becomes exemplary of Nietzsche’s warning to lie down with monsters. Malloy stares into the abyss and wants to take us down with him. By the time we get to Velma’s (Kuhoo Verna) slightly optimistic number at the end, it comes across less like Malloy believing that optimism and more like a contractually obligated “happy” ending.

Still, he and director Annie Tippe were blessed with an incredibly strong cast of vocalists who could easily echo off the walls of Peet’s stage without their mics plugged in. Not to forget, but Isabel Santiago’s Paula really is the pin that holds everything together. Her instinctive knowledge of the cult group (dubbed “Friends of Saul,” whom no one has ever met and may not exist) keeps the session moving, and — like anyone who’s ever been in charge of a group that should know better — lets Santiago sees an impatience with her accusations that she tries to bottle up.

The performances are the highlight of the show that goes on for too long without intermission. Worse, it never goes beyond the “internet sucks” line, something every person in the theater already knows. Malloy adds nothing to the argument, and he squanders his own entertainment value by letting his game blow up.

By chance, I left the theater to find that my telephone service had been cut, bringing me even closer to the characters of the play than I would have liked. Luckily I was able to restore it the next day and connected to emergency contacts again. As an 80s kid who still writes things down, I know exactly how to survive without constant digital attachments (made much easier after I quit social media years ago). I sympathize with the addictions of Malloy’s characters, but I didn’t want to be around them for a minute longer.

OCTET runs through May 29 at the Berkeley Repertory Theater. Tickets and information here†