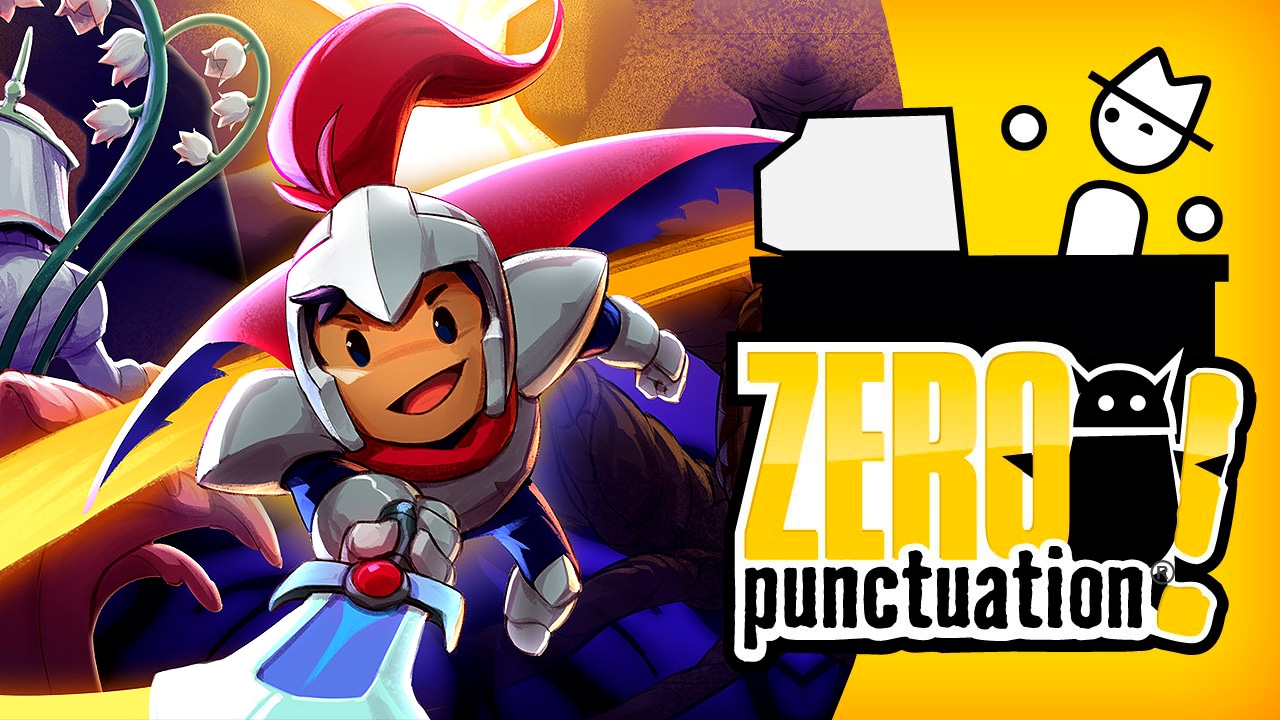 Want to watch Zero Punctuation ad-free? Sign up for The Escapist + today and support your favorite content creators!

Hell, there’s a lot of shit coming out of Early Access lately. It was like showing a room full of ten-year-old school kids that one video about menstruation and watching the innocence fade from their eyes one by one. I played Rogue Legacy 2, which last week triumphantly produced the Stained Sheet that represents his graduation from girlhood innocence. Not to be confused with Rouge Legacy, the biopic of the man who had the idea to put tits in Sonic the Hedgehog, Rogue Legacy is, funnily enough, a Legacy Roguelike. Each time you die, you switch to controlling the next heir in your family’s bloodline, which presumably means each attempt is decades apart, so it’s weird that none of the NPCs ever get older or anywhere else moving in and the surrounding world never invents flying cars, how many generations go through the meat grinder of my fucking dodge reflexes, but we probably aren’t meant to point this out. Since the definition of “roguelike” these days has about as much to do with the original Rogue as a pig holding a fish in its mouth has to do with Yoko Ono, all your upgrades and progress through the castle’s series of boss battles will be preserved. . permanently.

The only villainous thing about it is that the castle procedurally recovers with every attempt, like the board of directors on a doomed startup. But make no mistake about my tone: I really liked Rogue Legacy 1. I absolutely love Castlevania-style 2D platformers, I love swinging around a sword that’s so big it snaps through a wall and hits a floating jellyfish on the other side. an absolute humiliation of physics. The permanent upgrade made it quite easy to deal with Roguelikes. I like a challenge, but I think I liked it a lot more before every fucking indie game decided it was their duty to take turns making sure my balls are never unswollen, and Rogue Legacy just put cups of cold piss in my instead face threw is a refreshing break. Although note that I said I “liked” Rogue Legacy 1 past tense, and I say that because Rogue Legacy 2 goes right next to Left 4 Dead 2 and Hand of Fate 2 on my “sequels”, meaning we get the original more” shelf. Rogue Legacy 1 was all about pixel art and kept doing that thing where they would double the size of a pixel art enemy to make a boss version and it looked like absolute crunchy sweetcorn butts. Rogue Legacy 2 is basically the same game with more trinkets and better design and smooth, cartoonish, hand-animated artwork that never rolls across the eyeballs like a caterpillar in spiked running shoes.

Although it has had some impact since the first game of – go on, guess what. Um… Sex and the city? What? New! Dark souls! It’s become a bit Dark Soulsy for us, like 90% of the high-profile indie games these days. Why the hell would you say Sex and the Ci – I don’t know! You caught me on the spot! So now the environments are all grand cathedrals, ruined cities and magical libraries, the boss fights are all against tortured fallen lords with severe back problems, and there’s a rather intricate plot behind everything we put together from random document finds. A plot that seems to be themed around tragedy and hubris and tonally conflicts with the gameplay on the surface, where we might play as a character with a clown illness who can double-jump on the power of their earth-shattering farts. Still, fallen lords with back problems are more interesting to fight than just big versions of standard enemies that were the boss fights in Rogue Legacy 1, even if it would be nice to take a break from the fucking Soulsy shit one of these days and a playing game about, I don’t know, fighting off nuggets of unsolicited information about the sex lives of four grotesquely rich middle-aged women.

Your procedural game design lesson of the day is that rearranging the level layout doesn’t matter if the primary gameplay loop doesn’t change. It’s the difference between randomizing the contents of a bag of chips and randomizing the orifice you place them in. So I like how dying means you have to roll a new character with different attacks and abilities. It’s like doing one of those skill runs in a 2D Castlevania where every five minutes you have to rest what you find or randomize weapons, like you accidentally drank a potion of Tourette syndrome. But there are some character classes in Rogue Legacy 2 that I just can’t get to grips with. The bard is about as helpful as a prancing niece with a bachelor’s degree in music education can be. You are supposed to fire a nut and then jump on the nut to hurt nearby enemies, such as using a toaster that only works when you tap the browning button. And then there’s the barbarian who only deals full damage while standing on the ground, but this is a Castlevania-style 2D combat where if you ever fail to jump, you’re probably in the middle of a serious stroke. I didn’t see the point in taking either one if there was a knight or duelist available who just swings a sword and the thing dies on the other side.

So you only have to worry that you are not pressing the attack button with your eyeball, but with your thumb. As the difficulty increases you’ll want to worry as little as possible because the main trick that more advanced enemies have is throwing out more projectiles and all of a sudden you’ve brought a fencing sword into a bullet hell battle. So there’s an imbalance problem in that some characters are obviously better to play with than others. If you’re stuck with an heir who has that one debuff that turns the whole screen upside down, you might as well let them die ASAP and wait for the next one, though that’ll be hard to explain to the woman. An imbalance is part of the course with randomization and I think if everyone in the family got an equal piece of cake it probably wouldn’t be that interesting if one kid got two slices and the next got scoliosis and double… connected fingers crossed. But also the placement of enemies and objects in the levels sometimes feels very shaky. Funnily enough, it’s as if they were just randomly scattered across the available space like drops of urine at the start of an extremely ill-timed surprise party.

It’s easy to feel things aren’t quite fair when you’re ravaged by three skeletons and a rocket tower as you try to navigate the interior of an outdoor toilet. Like I said, these issues are kind of inherent in the format, and if they weren’t deal breakers in the first game, they won’t be now, because like I said, Rogue Legacy 2 is really just Rogue Legacy 1, but actually this is time. 1 immediately had a problem with too much enemy variation and 2 can better run them through the game. The different parts of the castle feel different in layout and navigation rather than just new wallpaper on the same platform arrangements. The art is more enjoyable, even if projectiles often collide with the background, as random generators are no better at aesthetic choices than gameplay balance. So now that we have a much-improved descendant, we might as well throw its predecessor in the trash of memory and move on. Which, to be honest, is completely on brand. That’s exactly how the game works. In that case, I’m looking forward to Rogue Legacy 3, which will also be slightly stronger, but will also have double vision and swollen testicles.