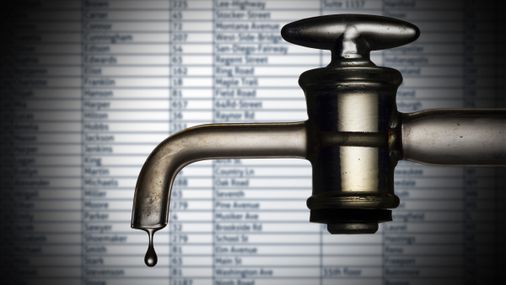 In recent months, efforts have been made to implement President Biden’s plan to strengthen U.S. electrical grids, expand access to drinking water and provide broadband internet to communities in need.

But the promise to bring internet and water to 24 million households across the country, the personal data of millions of Americans could inadvertently end up in the hands of U.S. immigration and customs authorities.

For years, ICE agents seeking information about potential targets have circumvented regulations by purchasing massive databases of Americans’ personal information, including customer records for water, gas, electricity, the Internet and other utilities. As part of our two-year investigation into ICE surveillance, Georgetown Law’s Center on Privacy & Technology found that Equifax, one of the nation’s largest credit bureaus, had customer files utility taken sent them in for credit assessment purposes and sold them to data giant Thomson Reuters, who entered them into databases used to search for individuals used by ICE. Via this route, no less than 171 million customers of major utility companies across the country may have shared their names and addresses with ICE agents, who don’t need a warrant to: search these records†

A weekly newsletter from the Boston Globe Ideas section, born at the intersection of ‘what if’ and ‘why not’.

In response to pressure from activists and Congress, utilities have instructed Equifax to: stop selling customer files. But downstream buyers like Thomson Reuters have not deleted the millions of records remaining in their database, but instead have “explored all avenues to continue to provide access to this data† And although ICE’s contract with Thomson Reuters expired last year, the agency has signed a seemingly identical agreement with another company, LexisNexis, which sells databases containing 210 million utility records from unspecified sources.

As legislators If they are serious about expanding Americans’ access to utilities such as heat, water, electricity and the Internet – services essential to life and livelihood – then they must protect the personal information that utilities collect from consumers.

There’s a reason agencies like ICE are failing millions of dollars to access utility data: 90 percent of US adults have at least one utility bill, and even people who leave minimal other paper trails — such as credit history or driver’s license records — are likely to still keep the lights on and the water running at home. Companies peddling with utility datasets to boast that “just about every American adult has” [utility] data” and that these records can reveal information that researchers “may not be able to reach any other way.” Utility accounts tend to follow you closely. More likely, turning on the power and connecting to the Internet is one of the first things a person does when moving to a new home.

However, despite how much sensitive information can be released through utility data, few laws exist to restrict the sale of data consumers share with utility companies. Federal-level regulation is weak and utility data safeguards are weak or absent in nearly every state.

This lack of protection could undermine people’s willingness to sign up for much-needed services. When a monthly gas or internet bill can make someone visible to ICE agents — as well as private investigators, police officers, debt collectors, and even bounty hunters hired to locate people who missed court dates – some households may decide registering for services is simply too much of a risk. Families concerned about their address falling into the wrong hands may make unsafe arrangements to get service, or even make the unthinkable choice of going without utilities altogether.

All of the horrifying effects on a household’s ability to get utilities can pose immediate health and safety risks, but they can also ripple outward, leading to long-lasting destabilizing effects throughout a family’s life. People who are afraid to sign up for utilities may feel compelled to rely on landlords to provide services, limiting their options for safe and affordable housing† In the age of remote work and gig jobs, households could end up without reliable internet access without the resources to keep their jobs or keep their children in school.

Biden’s promise to “ensure every American has access” to power and water takes more than just upgrading old infrastructure or building new service lines. As long as weak privacy laws allow agencies like ICE to exploit people’s needs for water and electricity and the Internet to keep an eye on them and their families, the promise of equal access will go unfulfilled. Lawmakers cannot afford to wait for households to close their accounts before taking meaningful precautions.