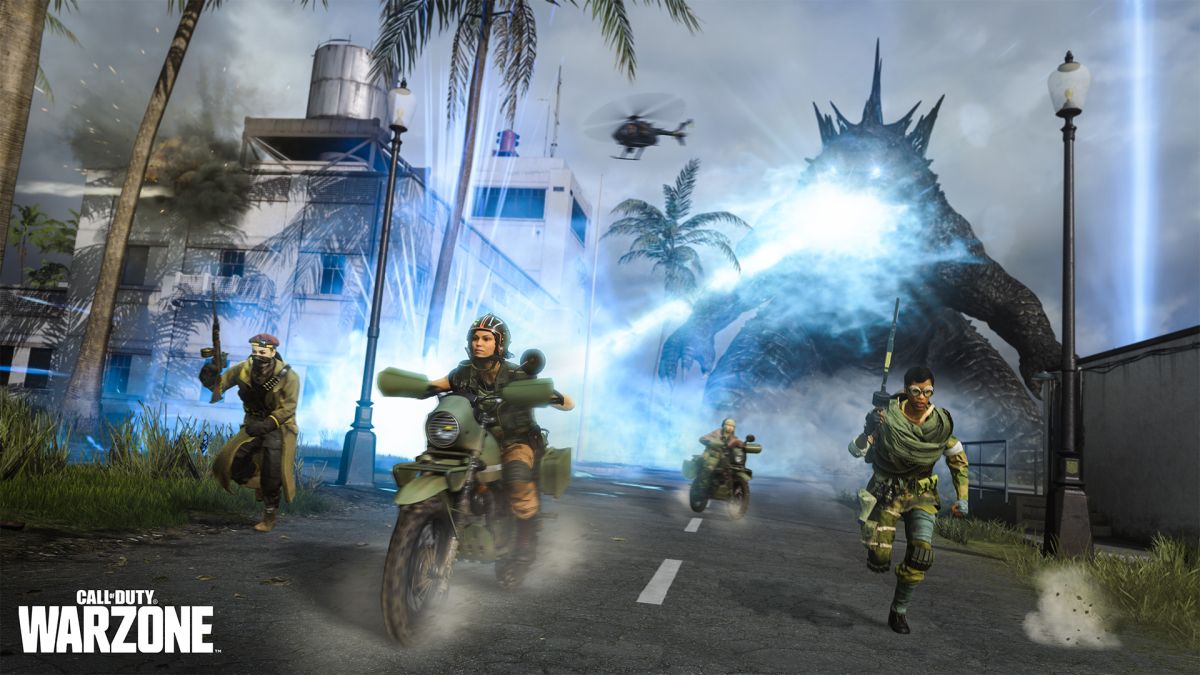 Harmful green gas squeezes my ankles, bullets whiz past my head, and a rumble akin to the sound of an approaching tornado sends my heart racing down my throat. I go forward and try desperately to reload my LMG, which is taking up way too much of my precious time – the gas kicks in. I slam the clip into place and get ready to run to an outcrop of rocks about 50 yards in front of me, but just as I get up to make my move, a piercing alien scream shakes my skeleton and an impossibly bright streak of bluish white light cuts through the sky in front of me. It’s the last thing I see before it all gets dark.

This is typical for a round of Warzone Operation Monarch, Call of Duty’s best limited-time event ever. In it, Warzone Pacific is invaded by Godzilla and Kong, and you’re just a humble soldier clambering around their giant feet like a helpless little ant. I haven’t had this much fun in Warzone in months, and I haven’t come across a crossover event that feels oh so good. If Warzone stayed like this forever, I’d be happy.

A few seconds into my first Warzone Operation Monarch match, I let out a cry of shocked laughter as I step out of the smoking doomed plane, pull my parachute and find myself hovering right in front of Godzilla’s eyeline. Standing just off the north coast of Caldera, the King of Monsters stomps around like a demon boy throwing a tantrum. It’s a sight to behold to see this alien beast hanging out in such a grounded world, and it just gets more ridiculous from there.

Operation Monarch matches require you to stay alive during a 60-player Resurgence on a smaller portion of Caldera, while collecting Monarch Intel to earn rewards. Monarch Intel can be stacked by finding it in supply boxes, drops and on fallen enemies – or by dealing damage to Godzilla and Kong. Reward tiers include gas mask, armor bag, loadout drop, and the super-powered Titan SCREAM device. It’s the Titan Killstreak that gets such a loud hoot from me that I startle several of my co-workers – this thing is wild†

During the match, Godzilla and Kong are quite content to stomp around looking angry – during this phase they are fairly harmless. But it’s not until they enter Titan Frenzy that you need to watch out: Godzilla unleashes his powerful beam of heat in a straight line cutting across the map, while Kong hurls a huge chunk of uprooted Caldera Earth dealing circular AOE damage. If you get a Titan Killstreak, you can basically use Godzilla or Kong as an extra deadly precision airstrike, and the results are epic.

Towards the end of one of my first games, with half my squad gone thanks to Resurgence expiring and three full squads left, a perfectly placed atomic breath from the Godzilla team wipes out an entire squad in the building next to me. In the wake of his atomic breath lies a streak of smoldering blue earth that my teammate and I use as a makeshift boundary wall to protect our backs. We take out the last two squads the old-fashioned way, with Godzilla yelling his approval in the background. How can you not love this?

Usually I have notes for a temporary mode. Of Halo Infinite’s Last Spartan Status, I want less power-ups and better spawns. Of Apex Legend’s Control, I want smaller maps and different gear options† But as for Warzone’s Operation Monarch, I have no notes. Unlike the Krampus event, which forced players to deal with the annoying NPC to play the traditional Battle Royale, Operation Monarch has its own playlist. If you want to fall into a chaotic carnage, it awaits you there like Godzilla sleeps in the center of the earth for years. But if you’re looking for the classic experience, you can completely avoid the titans.

And unlike the Halloween event – which I loved – Operation Monarch feels like the most organic crossover Warzone has seen yet. It strikes the perfect balance between fun and hectic, between new mechanics and existing ones. The revival formula means that an errant boulder landing on your head isn’t necessarily the end of your match, and the intermingling of Power Grab features with the traditional Battle Royale makes power-ups common. I win a few early matches, get knocked out quickly in the next few, but find myself jumping back into the playlist faster than any other Warzone mode.

In one match, my team is forced to retreat from the Peak in the center of the map and descend the mountain, where we are caught under enemy fire and have to duck into a tent to take cover. Just as it looks like we’re getting a moment to catch our breath and shield, Kong jumps off the Peak and lands directly on my teammate’s head, killing him instantly. Another teammate gives a nervous giggle before Kong flattens him too, and I continue into the tent to take cover, but within moments the king of the jungle team wipes out our entire squad. Laughing to myself I immediately start a new match because Warzone Operation Monarch is just so damn good.