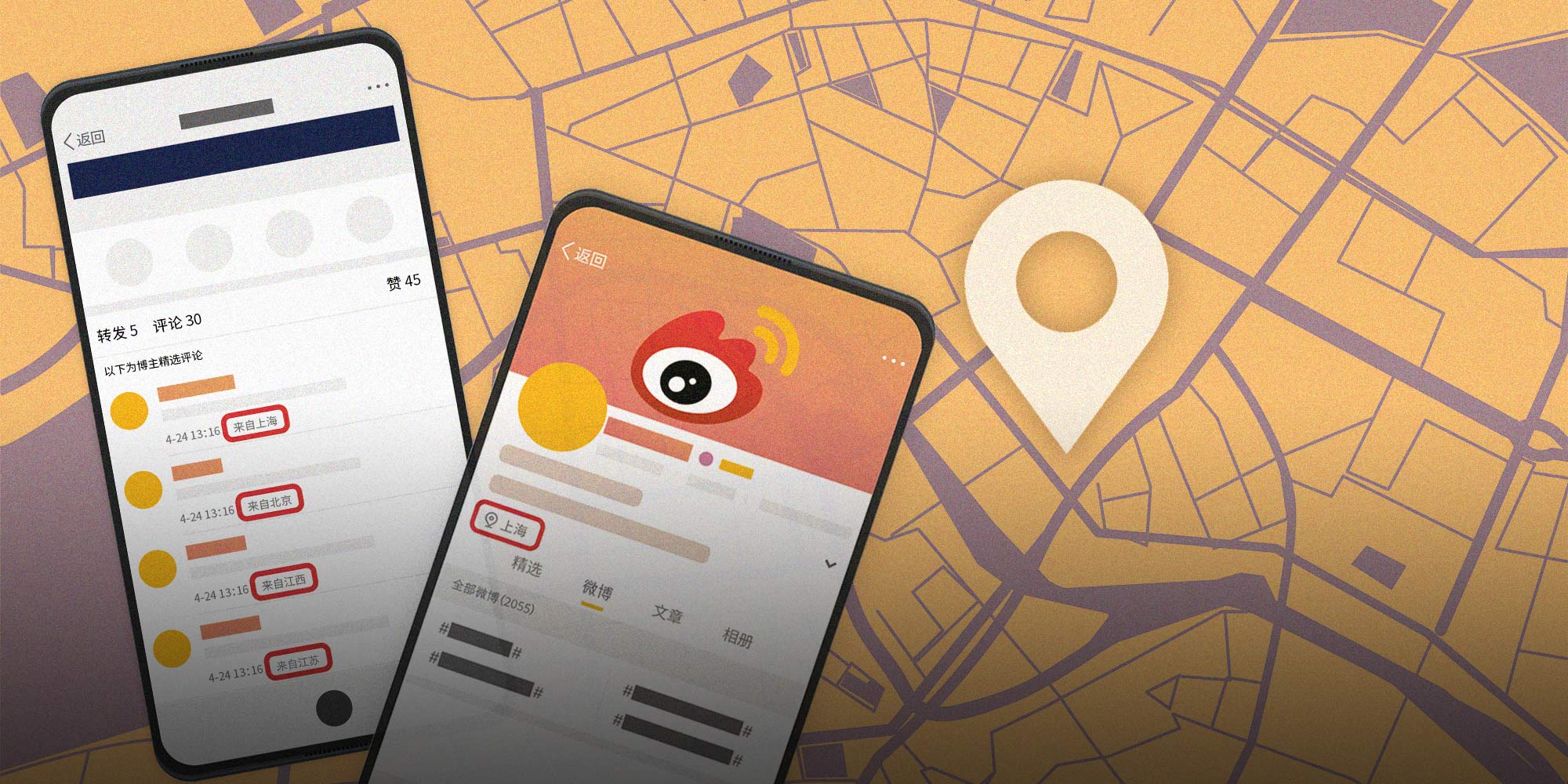 On April 28, Weibo, the Chinese equivalent of Twitter, announced that it would start displaying users’ IP address locations on their profile pages and on all replies on the site. Company framed the function as a necessary measure for “maintaining a healthy and orderly environment for discussion.”

According to Weibo’s official community account, the new location feature is just another tool in the site’s fight against misinformation: a way to prevent users from impersonating eyewitnesses or participants in major events. A message from March to announce the update specifically mentioned both the Russia-Ukraine war and the recent spate of domestic COVID-19 outbreaks as examples of the kinds of controversial topics the feature will cover.

Displaying users’ locations or IP addresses is not unprecedented. Early forums in mainland China showed users’ IP addresses, as did PTT, a popular forum in Taiwan that spawned the slogan “find your IP” – a reference to the ease with which messages come from government offices, public relations offices or in the foreign users could be identified.

But such practices are a distant memory for most internet users in mainland China. Since the demise of forums and the Facebook-like Renrenhave newer apps like Weibo, WeChat, and Douyin — the Chinese version of TikTok — redefined relationship of users with personal privacy. While Chinese platforms now generally require users to provide identifying information, such as a phone number, when registering, the information they display on their profiles is left to users’ discretion and anonymity has become the standard.

This even applies to public figures. Weibo’s own CEO, Wang Gaofei, posts under the handle “Coming and Going”, and his profile only identifies him as a “mobile internet analyst.” This can have unexpected consequences: In 2015, Wang expressed surprise when his account was sanctioned for a violation of the site’s community policies by a Weibo moderator who was probably unaware of his identity.

Weibo’s tolerance for anonymity, combined with the site’s relatively open structure, has helped to make it a vibrant public square where its 600 million users felt relatively free to exchange ideas and engage in daring discussions on social issues. It has also exacerbated some of the problems of the Web 2.0 era. The platform is struggling to cope with an increase in abusive messages, trolling and hate speech. Mistrust and hostility have taken over the site.

Rather than seeing this as a compromise for the benefits of anonymity, or as a natural consequence of the way social media brings people from across the political spectrum together, some users see a conspiracy. The accounts that disagree with them do so not out of deep-seated principles or beliefs, but because they are bots or agents of shadowy political forces. These accusations have become more frequent in recent years, propelled by emerging populism. The pandemic, which may have united humanity in a common goal, only made matters worse as unsubstantiated theories about the origin of the virus and the safety of various vaccines spread like wildfire online.

It is naive to think that social trust can be restored via a technology patch.

This has produced a worldview in which enemies lurk behind every social media handle. For example, during the recent COVID-19 lockdowns, popular bloggers and even some scientists have routinely accused social media platforms like Weibo of being compromised by foreign forces seeking to undermine China and its pandemic prevention strategy.

It is therefore not surprising that some users have welcomed Weibo’s new rule. Some of the bloggers mentioned above confiscated on the location tags to “prove” that people who disagreed with them were doing so from outside of China.

However, it soon became clear that location information was not a panacea, not least because managing large accounts is often a transnational affair. Users were suprised to find that Boris Johnson was posting from the southern province of Guangdong, while Russian figure skater and Olympic gold medalist Anna Shcherbakova’s account was in the United States. Some of China’s most prominent nationalist bloggers suddenly had to explain why they were posting from abroad.

Weibo quickly clarified the rule, stating that verified accounts would be allowed to hide their IP addresses, provided the person or organization behind them has publicly identified themselves. But that only reignited controversy over authenticated user privileges.

On a more fundamental level, it is naive to think that social trust can be restored via a technology patch. Social media has undoubtedly helped amplify extreme voices, but just as scientists pinpoint the 2008 financial crisis as a turning point in the rise of populism in America and the West, Chinese internet viewers must grapple with the role of regional and international inequalities in education, employment and digital literacy have played a role in the deterioration of the country’s online spaces. Stigmas, discrimination and inferiority or superiority complexes, many of which are regionally based, are just as much a problem online as they are offline.

If anything, the IP location policy can make things worse. While international users are only identified by country, domestic users are tagged by province. Online, users can no longer escape regional stereotypes. Post from Shanghai and other users will write you off as rich and contactless; mail from the central province of Henan, and you will be mocked as a thieving bumpkin†

The situation is no better for international users, including the hundreds of thousands of Chinese students and millions of Chinese workers living abroad. Since it is impossible to distinguish a foreign student from a foreign agent by their IP location alone, anyone posting from abroad could be attacked and harassed for harboring ulterior motives.

Anyone posting from abroad can be attacked and harassed for harboring ulterior motives.

Indeed, despite all of the company’s efforts to regulate certain discussions, Weibo has largely adopted a laissez-faire stance on hate speech and harassment. In 2020, Luo Xiang, an outspoken law professor and popular vlogger, left the site after a vicious troll campaign. More recently, a resident of Shanghai jumped until her death after receiving a spate of messages accusing her of not giving a sufficiently generous tip to a delivery person. During the Wuhan lockdown in 2020, a handful of anonymous but influential bloggers harassed the relatives of COVID-19 victims. Although they were suspendedthe sentence lasted only 15 days and they were allowed to keep their verified badges.

Part of the problem is that it’s in Weibo’s best interest to play with fire. The site benefits from involvement in controversial content, whether that be sexist comments by high profile figures or COVID-19 conspiracy theories. A 2020 data analysis by The Paper, the sister publication of Sixth Tone, found it that the most visible figure on Weibo’s highly promoted “trending” chart was Donald Trump.

Since Weibo introduced the new feature in March, other major Chinese social media apps, including ByteDance’s Jinri Toutiao news service and Tencent’s WeChat, have begun testing their own geolocation features. The moves come months after China’s powerful Cyberspace Administration released a draft regulation that would require all social media platforms to display users’ IP locations in their profiles. If that provisional version become law, Chinese social media could become a more transparent, but also a more polarized space – a development that ironically would mainly benefit the platforms.

If Weibo and other social media apps really cared as much about transparency and accountability as they say, they would apply the same standards to their own community policies, recommendation algorithms, and financial arrangements with advertisers. As for our own identities, beliefs and experiences, they are far too complex to be summarized in a single geographical tag. No one should be judged by where they come from, let alone where they come from. The new function is based on an essentialist worldview that everyone sees through the lens of ‘us versus them’. In the process, it denies us the very thing that makes us human: freedom of choice.