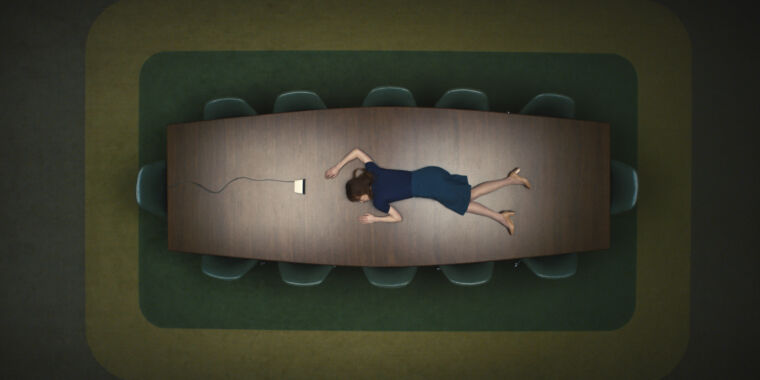 severance paywhich recently completed its first season on Apple TV+, explores a world where people can real separate their work and private lives. Thanks to a new procedure developed by Lumon Industries, people can split themselves into ‘innies’ (work self) and ‘outies’ (personal selves) – without sharing memories. This appeals to people like Mark, who lost his wife in a car accident and is struggling to cope with the grief. Why not forget about all that pain eight hours a day?

Mark works on the ‘separated floor’ in Lumon, a place where your own office – as bad as it is – looks like Disney World. But Marc likes it. Or thinks he loves it. In the meantime, we as viewers have some reservations. For example, what is he actually? doing all day for Lumon? What about the creepy cult-like atmosphere everywhere? What happened to his buddy Petey? And why are people so excited about waffle parties?

If you think this sounds like the setup for a corporate sci-fi dystopia, you’re not wrong. severance pay makes great TV from its premise. Directed by Ben Stiller, the show is funny, absurd, depressing, mysterious, visually distinctive and ultimately propelling. Each episode picks up speed from the slow start to the heady finale, making this one of the best things we’ve seen in 2022 so far. Here’s why.

(Some minor spoilers below)

Beauty in the midst of banality

severance pay pulls off a nifty trick: windowless offices, fluorescent lighting, corporate furniture, break rooms, stairs, elevators, and antiseptic white hallways turn into something that goes from banal to menacing to — may I say it? – is wonderful.

The banality is clear enough. Lumon employees are encouraged with ridiculous corporate “benefits” like finger traps and waffle parties, even when they work in absurdly empty spaces. The workers respond to middle managers who never seem fully human, even when they ask people to show “kind eyes” to others. And the food that comes out of the vending machine – shriveled raisins, anyone? – is unappetizing at best. The team’s collective work may be “mysterious and important,” as one character puts it, but this is an article of faith. To the viewer, the work seems monotonous.

Then the threat is layered on top of the banality. We meet Helly R. in a normal conference room – but one where she’s locked up, stretched out on the table, and spoken in a disembodied voice. We hear hints of violence between the departments and are treated to strange, cult-like statements from ‘the Handbook’. A character suffers from disturbing hallucinations. A paper cutter is repurposed as a threatening weapon. The company has a mysterious plan to… do something. The break room is a really bad place to be. So severance pay takes its place in a long line of corporate dystopias.

But beneath the threat, we also feel an increasing sense of wonder. The labyrinthine basement is a maze that Lumon has forbidden his associates to map. Why? We do not know. But we follow our team of lovable Lumon losers as they, like growing toddlers, stray further than their guardians allow. Our team discovers new things. They find other departments, hinting that there are many more waiting to be revealed. They explore a bizarre Perpetuity Wing. They find some, eh, small bottle fed four-legged friends (not to be too spoiler-y). Lumon may be scary, but people still react to beauty when they find it, like Burt and Irving do in the Plant Room.

Between all the maze-like mysteries, our team begins to make connections – between departments, between inner and outer selves, between each other. People grow, thanks in part to a ridiculous self-help book that ends up on the severed floor. Families, lovers and children are becoming increasingly important.

severance pay is an office parody. It is a story of corporate dystopia and evil plans. But it is also a performance about healing, empathy, new life and emotional growth under unpromising circumstances. Keeping all these elements together gives the show its peculiar impact.